Welcome to the Catholic University of South Sudan

Message from the Vice Chancellor

In July 2007 the Sudan Catholic Bishops’ Conference (SCBC) established The Catholic University of Sudan (CUofS) as a national institution with branches/faculties to be placed in Northern and Southern Sudan. The following year, in September 2008, the University inaugurated the Faculty of Arts and Social Sciences (FASS) in Juba with some 40 pioneer students in the Department of Economics and Business Administration. In 2011, after the independence of South Sudan, the name was changed to The Catholic University of South Sudan (CUofSS). In August of the same year began a Department of Education to train secondary school teachers. In October 2009, the University opened the Faculty of Agricultural and Environmental Sciences (FAES) in Wau (Wau State). In May 2012, the CUofSS was affiliated to the Catholic University of Eastern Africa (CUEA). The University granted certificates of completion to 22 students in May 2012 and in October the Catholic University of Eastern Africa (CUEA) in Nairobi awarded them a BA degree in Economics. In May 2013, 59 students completed the CUofSS program and in October, CUEA awarded them a BA degree. Since 2012 CuofSS has over 500 graduates. During the academic year 2015-16, CUofSS has an enrollment of more than 1400 students in Juba Campus and 356 students in FAES/Wau Campus.

CUofSS is striving to give excellent education to all

Find out what our are students' benefits.

Catholic University of South Sudan has attained the lincence for its legality from the National Council of higher Education on 25th of March 2017. Also received the temporary approval of opperation. 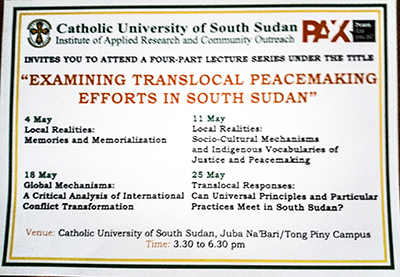 CUofSS Invites you to attend a four-Part lecture series under the title
"EXMINING TRANSLOCAL PEACEMAKING EFFORTS IN SOUTH SUDAN".

CUofSS would like to provide you with the new admission details, as well as new Application form which you can download in pdf format.

The programs of the following Faculties are effectively operational at CUofSS:

What's new in the CUofSS? More on the way

CUofSS through its tireless effort was able to provide the remarkable education to its students since from the start, and graduated hundreds of student so far. With its affiliation to other Catholic universities in East Africa, it is expecting to graduate thousands in the future time.

CUofSS is working on its new main campus in Juba. If everything goes well, it will not take very long for the campus to complete. Currently, even though the campus is under construction, but stil there is room where students are taking their lectures and activities.